Apocalyptic tone now on your iPhone and iPad 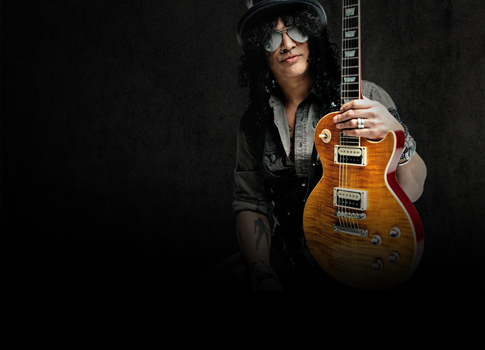 Hook up with Slash

AmpliTube Slash lets you configure a flexible guitar signal chain complete with 6 inline stompbox effects (4 pre amp, 2 post), an amplifier head and cabinet combination and a single-track recorder (expandable to a full production suite of 8 tracks, plus a complete set of mixing and mastering tools) for capturing your musical ideas quickly and easily.

Before we get to the impressive array of Slash’s gear that’s included, a quick true story.

Slash is an AmpliTube user since the beginning. He’s used our studio versions for years on countless records both in tracking and post production roles. He also was an early adopter of the AmpliTube iPhone and the iRig. We didn’t know this until our interview, but many of the musical ideas you hear on “Apocalyptic Love” were first recorded on the road in various hotel rooms in the wee hours of the morning using an iRig and AmpliTube for iPad. No kidding. You can listen to him talking about it in our exclusive interview.

Now that you know he truly is a “user” of AmpliTube and not just an endorser (we don’t actually have “endorsers” for our products… all of our artists are active users and community supporters), you should get a better appreciation for what it is — pure Slash tone. Apocalypic tone.
And now it can be yours.

AmpliTube Slash for iPhone and iPad features models of all the legendary signature gear used by Slash in the studio and in his live performances. Now you can rock models of the legendary Marshall® JCM Slash Edition Silver Jubilee, the Marshall® AFD100 plus 6 of Slash's signature guitar pedals and play along with Slash’s extensive discography or any music from your music library. Also included is a collection of Slash guitar tone preset settings, provided as starting points for your own tone tweaking or playing along. 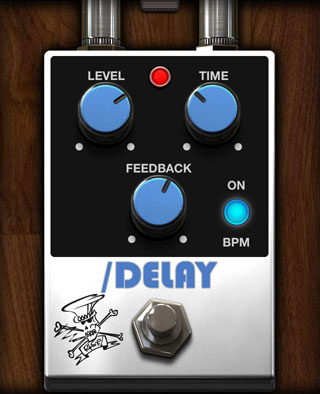 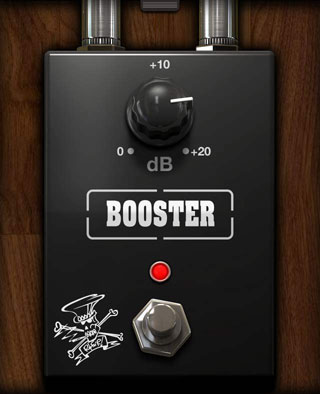 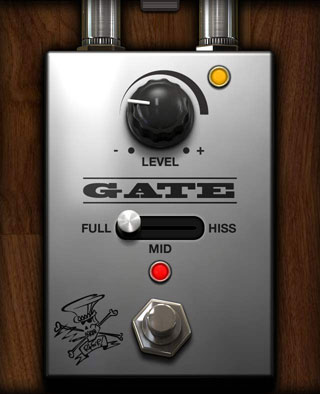 Gate
Based on
MXR® Smart Gate® 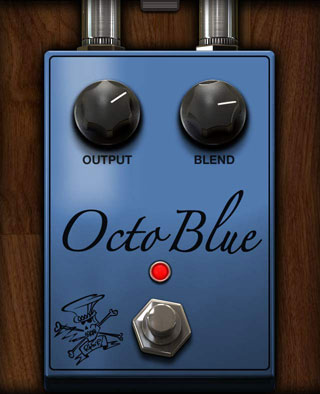 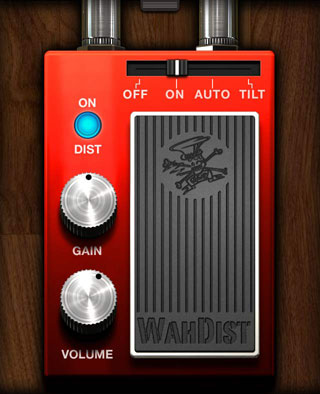 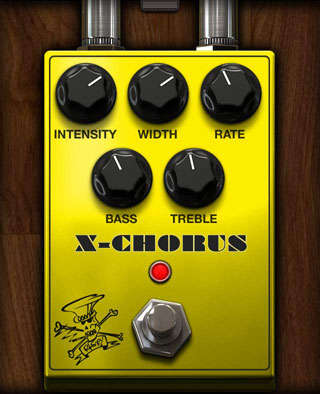 The unique AmpliTube Slash signal chain lets you build your Slash rig with 6 simultaneous (4 pre amp, 2 post) stompbox effects running into an amplifier head, a speaker cabinet and a microphone. Each element of your tone is individually selectable, with fully operational controls for ultimate ‘tweak-ability’.

Mike it in the Cab Room

You’re going to have a lot of fun experimenting and exploring sonic possibilities with AmpliTube Slash. Its “Cab Room” feature gives you the keys to your very own virtual studio room that you can use to mike your speaker cabinets in 3D with up to 2 different microphones.

Now you can easily find the sweet spot for any amp/cabinet combo or try wild, new combinations for an unlimited assortment of inspiring tones. 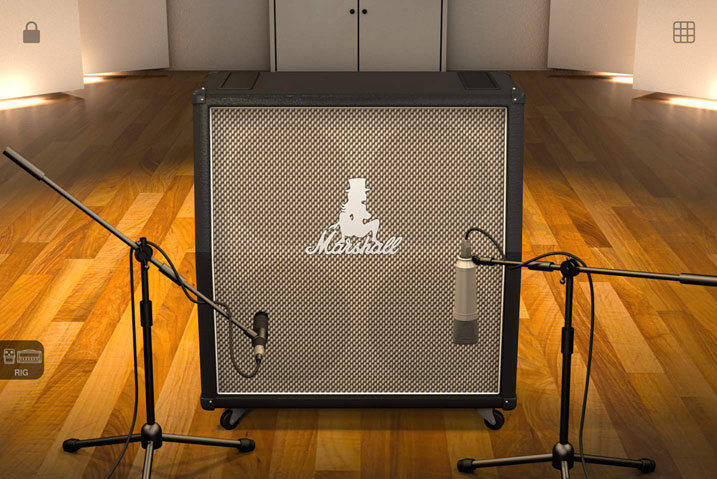 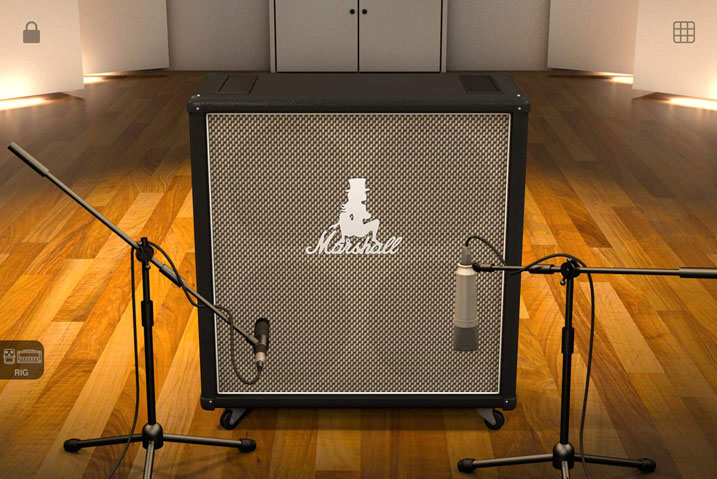 Ready for the stage

AmpliTube’s new Live Mode offers all the essential information you need, at a glance and in a layout that’s easy to read on-stage.

See your entire chain clearly, with visual indicators of what’s on and off, or easily see and change your presets.

Live Mode activates with a touch and eliminates anything that would distract you from your performance.

You get a live-optimized interface that rivals any pedalboard, without sacrificing AmpliTube’s world-class studio sound. 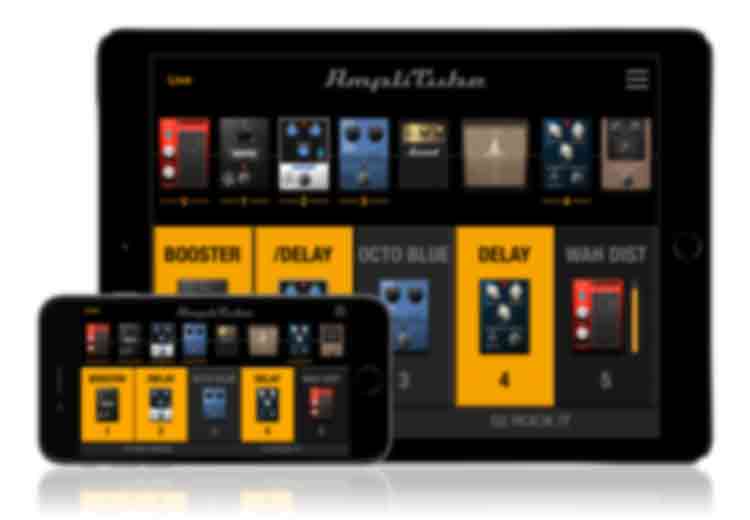 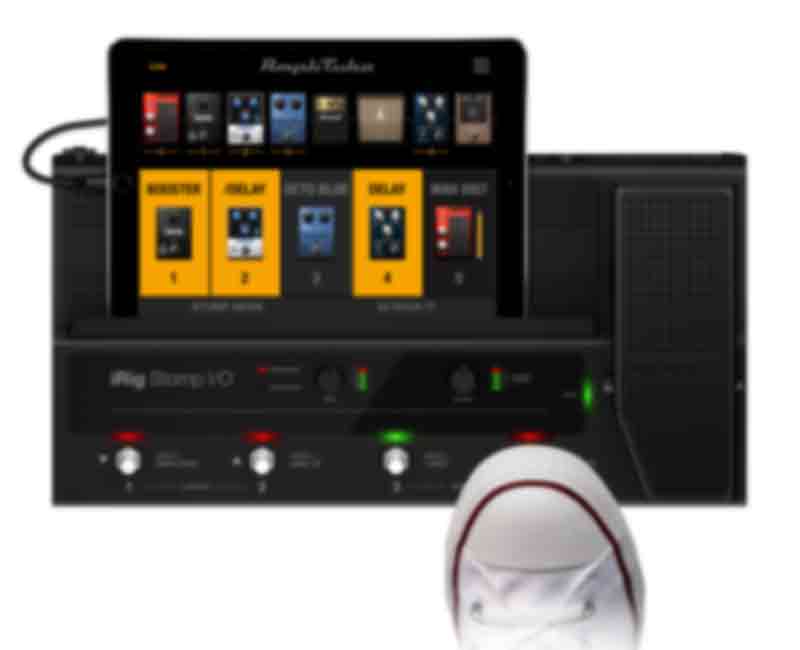 AmpliTube Slash features a single-track recording studio that can be expanded to a full 8-track multi-track recording studio and mastering suite. It features 8-track recording capabilities, with a bounce (just in case you run out of room), and each channel has 2 independent sends to a master effects section, plus a global EQ and Compressor section for tightening up your mix. You can import material directly into a channel and record along with backing tracks, play along with Slash, or use an iRig Mic to create stunning vocal tracks. 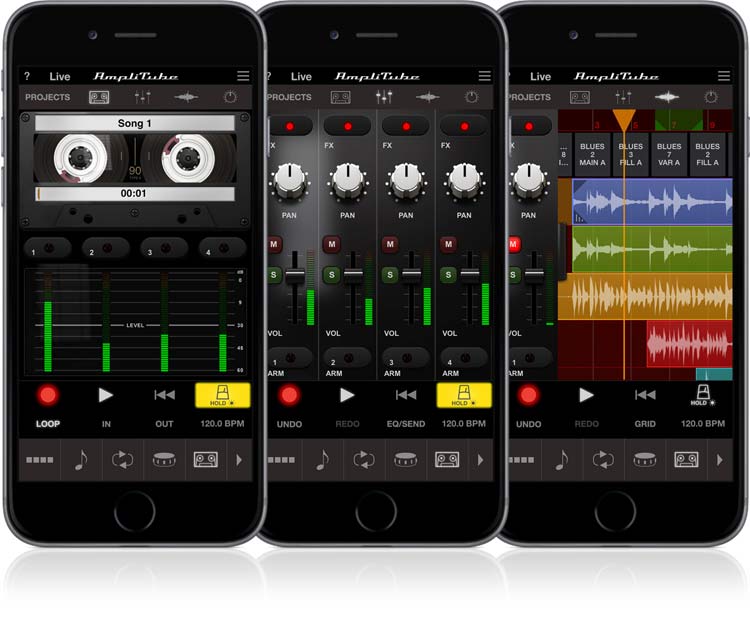 And as if that wasn’t enough, AmpliTube Slash's optional Studio mode lets you harness the raw potential of DAW-style timeline waveform editing. This means that you can compose, arrange, remix, edit and produce complete songs from start to finish while on the go. 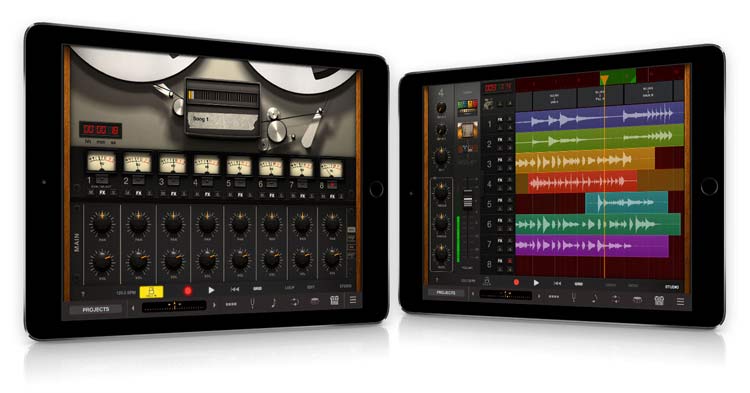 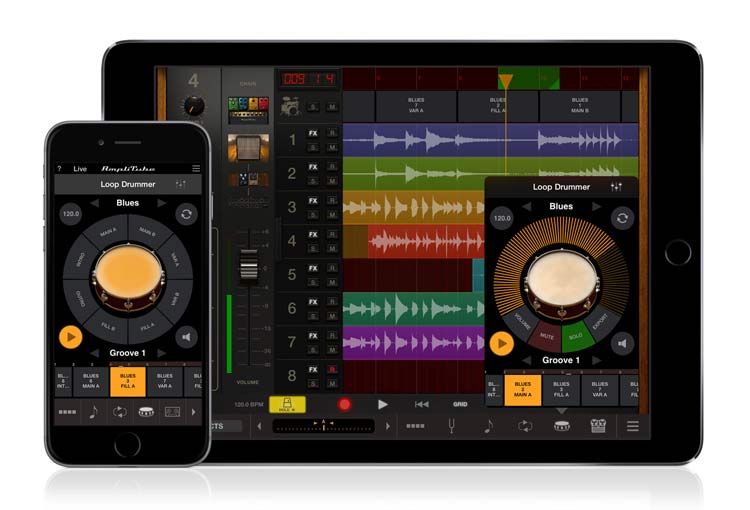 AmpliTube has a secret weapon. It's called Loop Drummer, and it's like a drummer who always shows up, is always in the pocket and doesn't hit more hardware than drums. It’s a loop-based drum module that gives you smokin’ drum tracks to record, jam and practice with.

It comes with a selection of rock loops, and you can easily expand your collection thanks to its versatile library of additional Style Packs (with 64 loops in each) that cover nearly every rhythm you can imagine: Rock, Blues, Country, Pop, Funk, Punk, Metal, Electro and more. All in all, the Loop Drummer library has over 500 loops to choose from!

Like to get loopy? AmpliTube Slash's optional Looper feature gives you a convenient way to record and play up to 4 loops at a time. And you can export your creations using its handy export function. It's the perfect thing for when you want to experiment and come up with cool new ideas. Now you can create your own accompaniment and play with all sorts of different melodies, leads and chord progressions on the fly, and at the touch of a button.

The most precise tuner for iOS ever

AmpliTube Slash comes with a pretty accurate tuner and metronome. But you can augment this with IK’s UltraTuner, the most precise tuner for iOS ever. It’s accurate down to 1/100th of a cent (that’s 10 times more accurate than mechanical strobe tuners, the hardware “gold standard” equivalent).

It also features two modes that let you switch depending on whether you need an extremely visible tuner for low-light stage use or a hyper-accurate pitch-over-time display for more complex tuning scenarios: It's great for tuning all kinds of instruments and even for vocal and instrument pitch training and practice.

Learn from the Riff Master

AmpliTube Slash also features a robust “song” player section that lets you play along with songs or backing tracks by importing them directly from your device iPod library or from your computer. The song section also features links to the new “Apocalyptic Love” album and links to Slash music available on the iTunes store that can be purchased and added to your library and the app for play-along purposes. Plus, the song player has a "NO VOICE" feature that lets you mute the center pan of the music (where vocals and leads are usually placed in the mix) so you can play and sing with the band. Go ahead, Slash doesn't mind.

The Song section also includes our popular SpeedTrainer learning/practice feature which can slow down or speed up the tempo of audio material without affecting the pitch.

You can use Amplitube Slash with Inter-App Audio to process and add effects to the sound of all your favorite mobile music creation apps. This means that Amplitube Slash's realistic amplifiers, stompbox effects and other cool pieces of gear can be used with things like Apple GarageBand.

Plugging in to a world of sound

Use our line of iRig guitar and bass interfaces and foot controllers to connect your instrument to your iPhone, iPad, Mac and PC to play through and control AmpliTube.

Use Your Illusion I

Use Your Illusion II

AmpliTube®, iRig® areregistered trademarks property of IK Multimedia Production Srl. All other product names and images, trademarks and artists names are the property of their respective owners, which are in no way associated or affiliated with IK Multimedia. Product names are used solely for the purpose of identifying the specific products that were studied during IK Multimedia’s sound model development and for describing certain types of tones produced with IK Multimedia’s digital modeling technology. Use of these names does not imply any cooperation or endorsement. FENDER™ and all FENDER amplifiers, logos, and trade dress are the trademarks of FMIC and used herein under license. All rights reserved. iPhone®, iPod touch®, iPad® are trademarks of Apple Computer, Inc., registered in the U.S. and other countries. App Store is a service mark of Apple Inc.