MODO DRUM, IK's first physical modeling drum virtual instrument, is now available. A sequel to our award-winning MODO BASS software, MODO DRUM brings musicians of all styles and genres a new level of customization, detail and realism, that is unprecedented in any plug-in and standalone software to date.  Get the breakthrough physical modeling drum virtual instrument before the introductory pricing ends!  As of September 2019 MODO DRUM pricing will be:  regular version $/€399.99; crossgrade $/€299.99.

Using a powerful combination of modal synthesis and advanced sampling, MODO DRUM offers 10 deeply customizable, virtual drum kits with real-time access to every parameter of each drum (kick, snares and toms) – from size and tension, to shell profile and playing style, and more.  Cymbals can also be tuned and damping adjusted to ensure incredibly realistic music tracks.

To further shape their sound, users can place their kit in different acoustic environments and take advantage of a full mixer with sends and buses, as well as 19 studio processors and effects from IK’s acclaimed T-RackS and AmpliTube software titles to add the final polish to any kit. An integrated Groove manager featuring more than 1,400 patterns allows users to create beats right out of the box.

Unlike traditional sample-based virtual instruments, MODO DRUM utilizes IK’s award-winning modal synthesis technology and an ultra-optimized sound engine to bring drums to life. The result of 11 years of research and development with one of the oldest universities in Europe, each drum’s acoustic behavior is determined by its physical parameters: dimensions, materials, skin, and more, as well by the playing style, the interaction of the drum head with the body, the effect of sympathetic vibrations and the acoustic interaction with the room. MODO DRUM creates incredibly authentic sound in real time, recreating those ever-changing interactions between the player, drums, and room on the fly in a new way that no current sample-based software can do.

MODO DRUM offers 10 iconic drum kits to cover every style and genre of music. From jazz to grunge kits and maple shells to exotic bubinga, each kit has been chosen to represent a particular style, genre or time period, for the widest possible range of timbres and tones. Three complete cymbal sets are also included, as well as tambourine, cowbell and claps for full General MIDI compatibility.

MODO DRUM offers the most customization options ever seen in a drum plug-in, allowing users to control the entire act of playing drums – from the kit itself, to playing style, stick selection, room choice and effects.

The Customize section allows users to add, remove, swap and rearrange drums from starter kits. For each drum in the kit, users can then adjust a wide selection of elements on the fly, including the skins, tuning, damping, diameter, height and the shell profile of the drum itself. 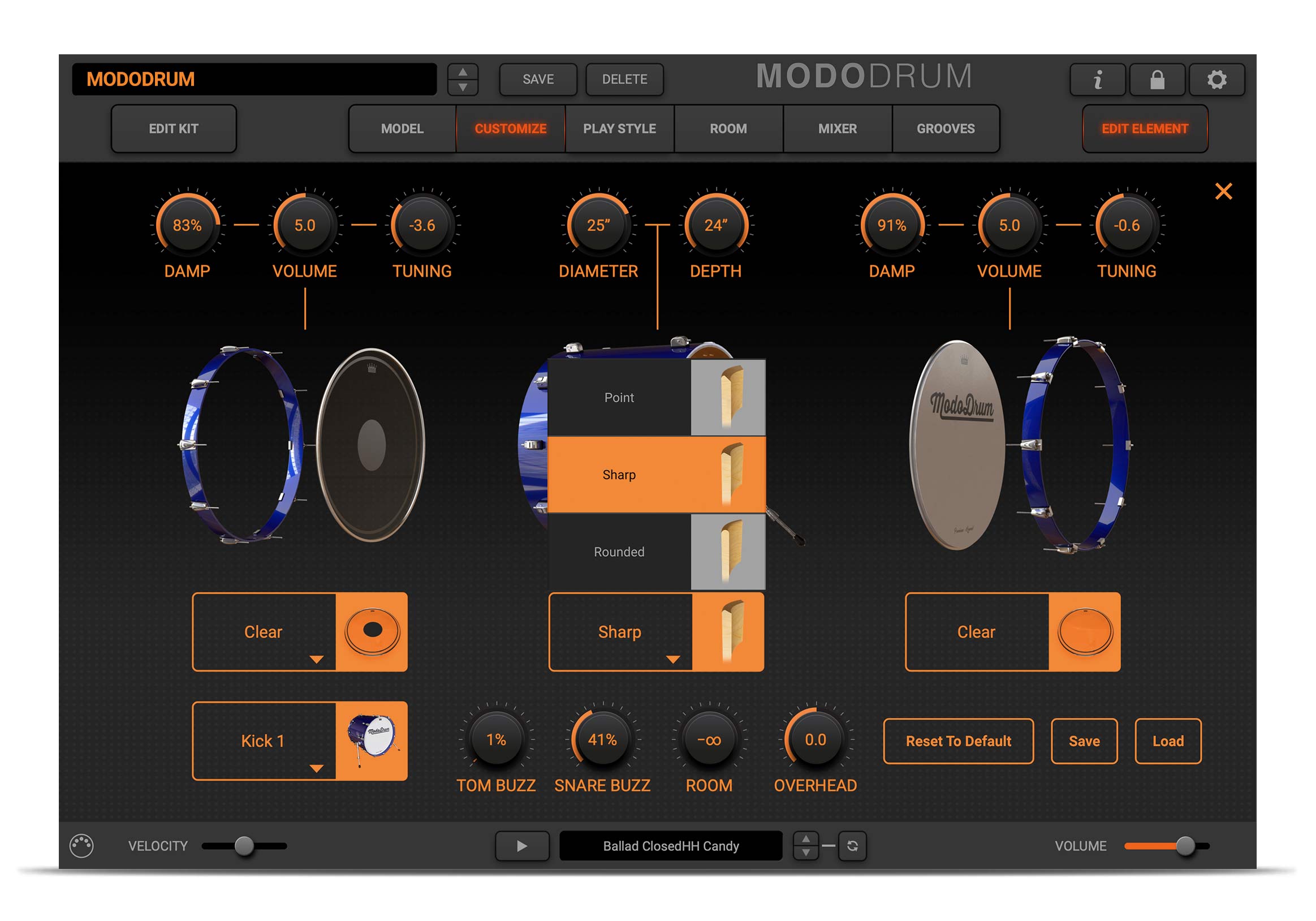 For snare drums, the type and tension of the snare can be adjusted, and for both kick and snare, users can even adjust the sympathetic vibration of nearby drums. Cymbals can be tuned up and down, and damping can be adjusted to precisely shape their sound and performance.

Any element can be saved as an individual preset; entire kits can also be saved for future use.

Beyond basic kit construction, users can also control the way the “drummer” plays each drum and cymbal, using the Play Style section.

Users can adjust the location and accuracy of each drum hit to shape the sound and give their grooves a more precise or more relaxed feel, and also select from a range of cymbal articulations. The kick drum can be customized to indicate a heel up or down technique and to select the type of beaters (felt, plastic or wood). A selection of stick types is also available for each hand. 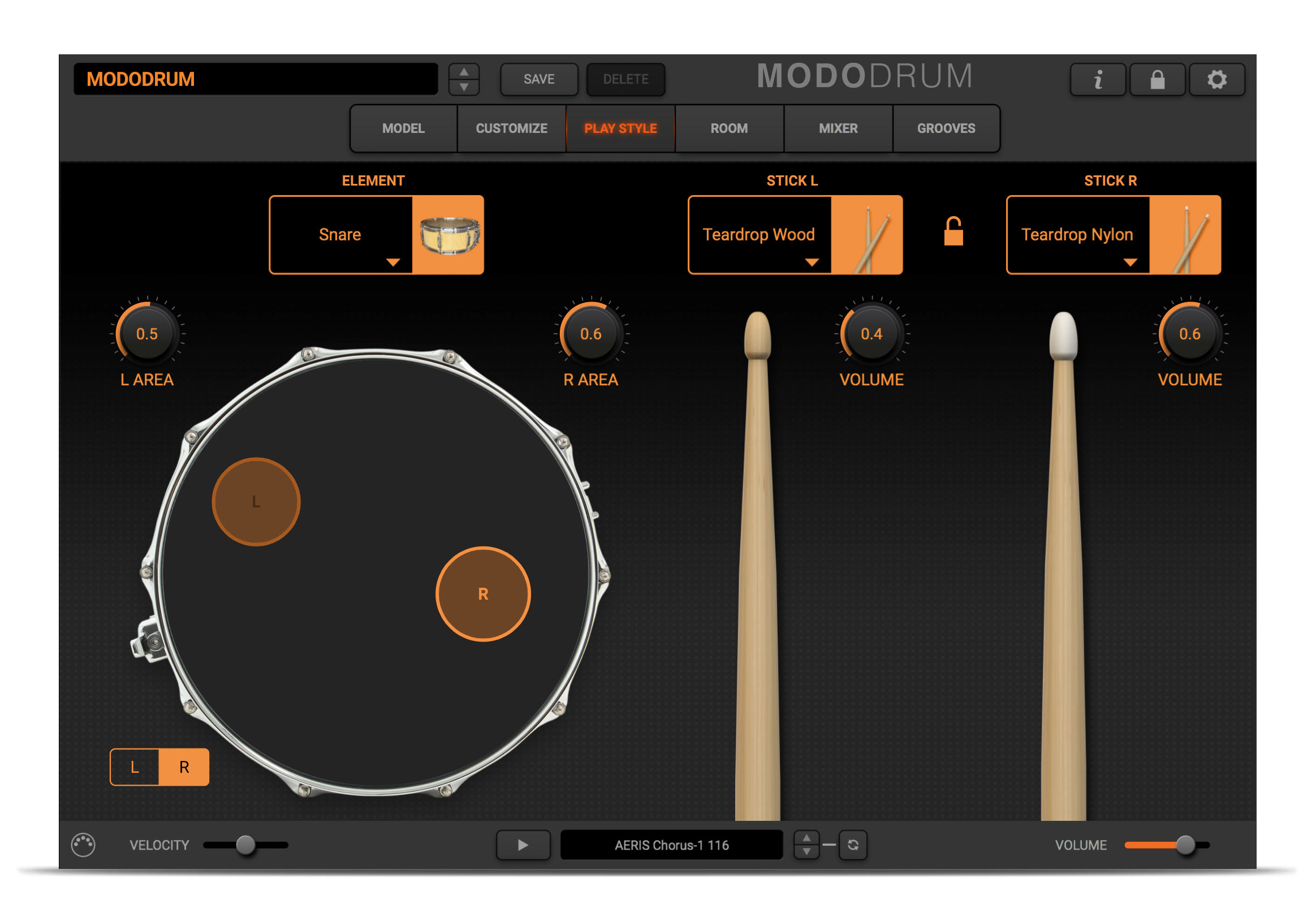 For added realism, MODO DRUM’s infinite round robin feature ensures that no two hits sound identical. As with a real drummer, it offers a subtly different performance every time.

Rooms that make a difference 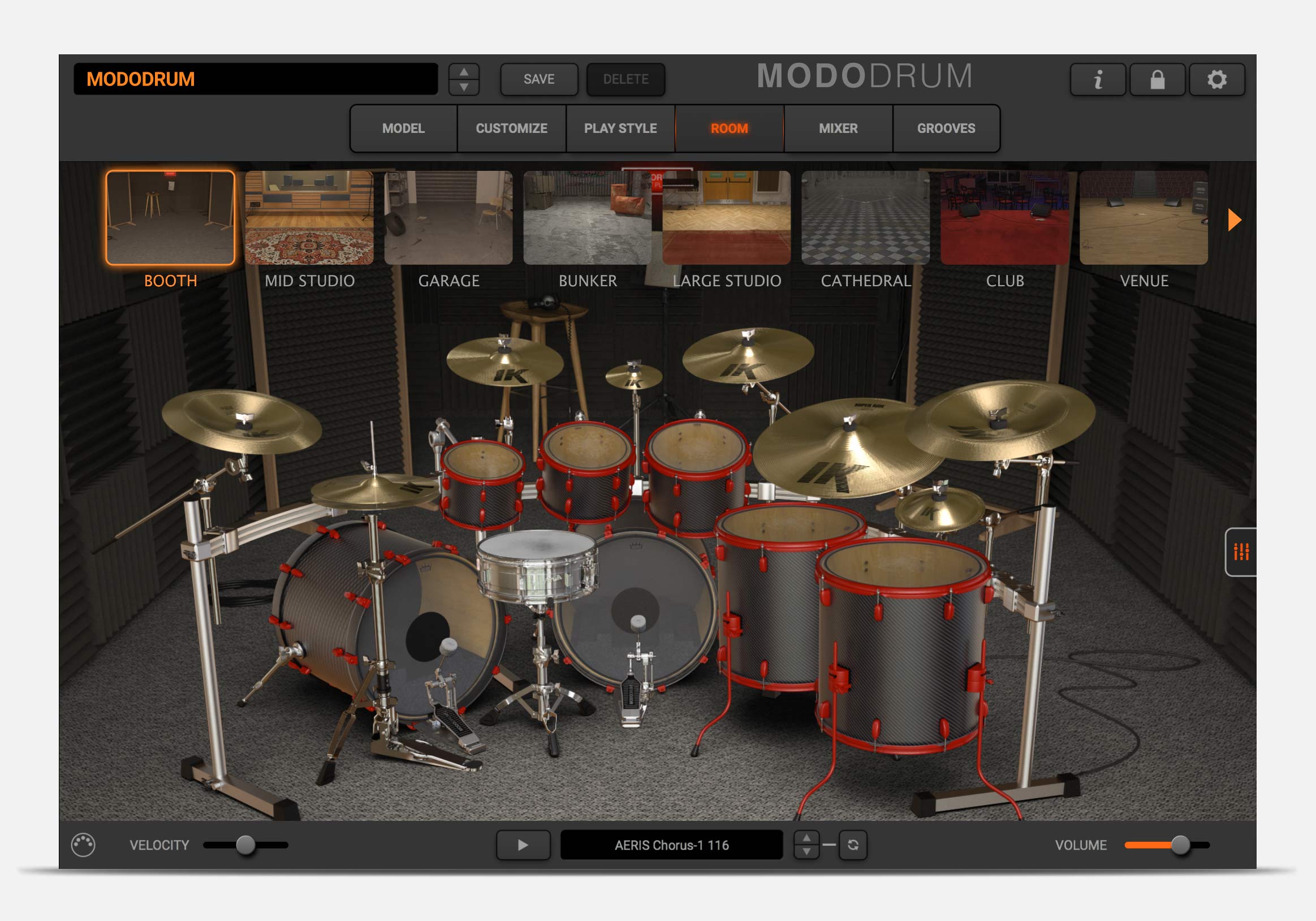 MODO DRUM uses convolution to ensure each element of a kit interacts naturally with the space and with each other. Let it ring or add gates and compression on the room tone for more creative drum sounds.

The built-in mixer provides total control over the recorded sound. Users can adjust levels and panning per element as well as mute, solo, and flip phase. Elements can be grouped in buses, and each element has two sends to process multiple elements with the same global FX, for a more cohesive feel. 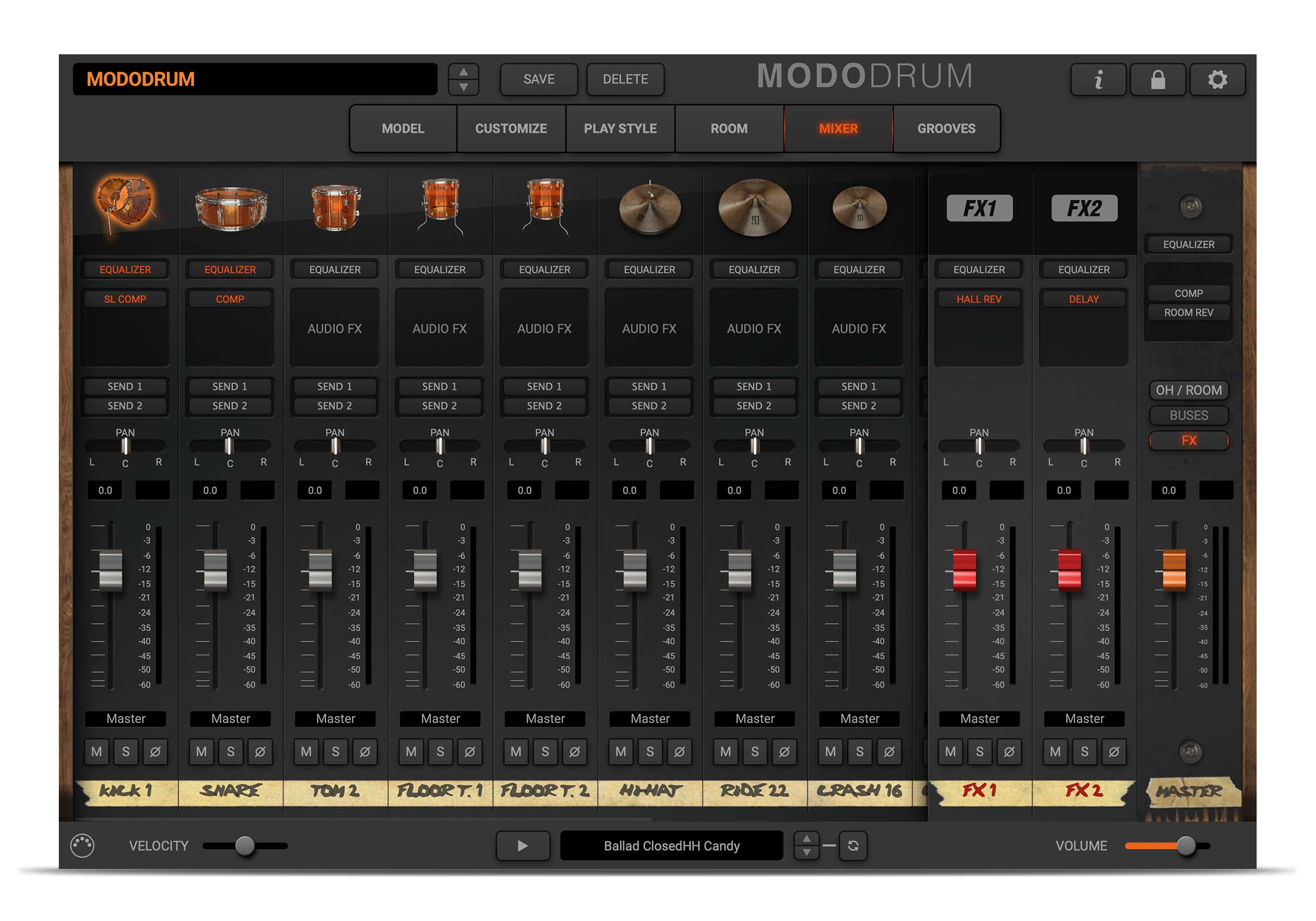 A massive suite of 19 studio processors and effects derived from IK’s T-RackS and AmpliTube is also included, to professionally sculpt the final flavor of each kit (distortion, modulation, reverb/delay, and more). Tracks, buses, FX returns, and the master output each host an 8-band parametric high-end EQ plus four additional effects slots for endless sound shaping possibilities.

Start groovin’ out of the box

These loops were handcrafted by IK’s team to be unmistakably unique, authentic, and inspiring. Users can trigger all loops from within MODO DRUM, or drag and drop them into a DAW for additional possibilities.

MODO DRUM is now available from the IK Multimedia online store and from IK authorized dealers worldwide for a special introductory price of $/€299.99* for digital download or $/€329.99 for a boxed USB version through August 31st.

As a special thank you, current owners of IK's MODO BASS software who log in will receive an automatic coupon for $/€50 that can be applied to the crossgrade pricing.