Interview with a Grammy® winning engineer and producer

Dave Kerzner from IK Multimedia interviewed Grammy-winning engineer/producer Dave Way about his recording and mixing techniques in the studio over the years with hardware mixing consoles and outboard gear as well as today’s powerful software emulations of popular EQs, compressors and more in IK Multimedia’s T-RackS 5.

We talked to Dave Way about his recording and mixing techniques in the studio over the years with hardware mixing consoles and outboard gear as well as today’s powerful software emulations of popular EQs, compressors and more in IK Multimedia’s T-RackS 5. Dave likes T-RackS so much that he put together 40 brand new T-RackS 5 presets that offer great starting point processing chains and settings for vocals, drums and various instruments. T-RackS 5 users can get these “Engineer Presets” from Dave Way as well as other legendary engineers like Tom Lord-Alge, Nick Davis and more for FREE in their IK user area.  To make this even more fun and educational for both beginners and pros, we’ve provided descriptions per preset with suggestions of use and I’ve interviewed them asking about how they work in the studio with some of the biggest artists in the world. – Dave Kerzner

Hello Dave thanks for talking with us today.  You've worked with so many artists in the studio and have produced and mixed countless albums and hit singles. Our readers would love to know how you work and what you use in the studio. Let’s start by asking what you would typically do when processing a lead vocal in a mix.

Dave Way: Well, pretty much for all vocals I’ll start with filtering out some lows before it goes into any compressors which would be next. So, I’ll filter out as much as I can honestly. Sometimes you’d be surprised where it ends up especially in a dense rock thing. You can be filtering out up to 200 hertz sometimes. But, for the most part I’ll just be filtering out some of the subby stuff maybe about up to 70 hertz or so. For compression, usually the first one I’ll go for in hardware is an 1176. In software, the Black 76 in T-RackS is a great emulation of it.

What would you use for the high pass filter typically?

It could be anything. It’s just a general-purpose kind of thing. Sometimes I’ll just use the one in ProTools or if I’m using the British Channel in T-RackS the high pass filter is great because that emulates the E and G series SSL consoles I’ve used for many years. I like any filter that can really do it at a sharp slope. 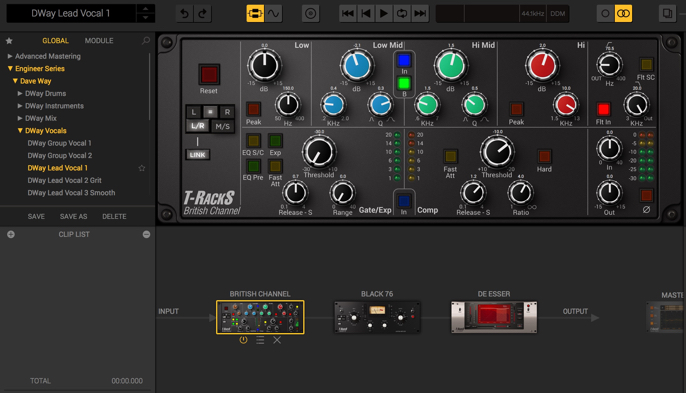 Then you were saying about compression?

Yeah for compression in hardware I’ll usually go for either a blue stripe or black 1176. In software, the Black 76 in T-RackS will do the trick. Usually I’ll have a medium type of attack to a faster attack setting and a 4 to 1 ratio and a pretty fast release. Depending on how much stuff is going on usually if it’s a really dense thing and I need the vocal to just kind of cut through I’ll hit it pretty hard you know like 7, 8 sometimes 10 db of compression. And then from there depending on the singer, if there’s sibilance issue I’ll probably put a de-esser there and that could be just gently or more drastic. Sometimes on a track I’ll grab a de-esser and sometimes I’ll just physically go in and if it’s just in a couple of spots I’ll just kind of do it with pencil automation just dipping them down in spots or doing a fade on the wave if it’s in the beginning of a phrase or whatever.

It always depends on the style but for rock tracks something like the British Channel will work. I grew up on SSL consoles so I’m happy to use an emulation of an SSL in software on a lot of applications.

What SSL consoles have you used in your career as an engineer/producer?

I’ve used them all and I used to have a 6000 E here at Way Station, my studio. I always preferred an E series when available but for times I wanted a bit more clarity I’d prefer a G series. Particularly on vocals I’ll more often use a G channel and it’s nice to have that multiplied frequency thing to get the really high stuff for a certain sheen but I can also use other modules like the EQP-1A for that sheen as well. I recommend people experiment with that to their own liking if they’re using my presets. Switch back and forth between the E and G or between the British and White Channels to see what works best in the track. I do like SSL emulations for mid range. They’ve just got that crunch and bite. 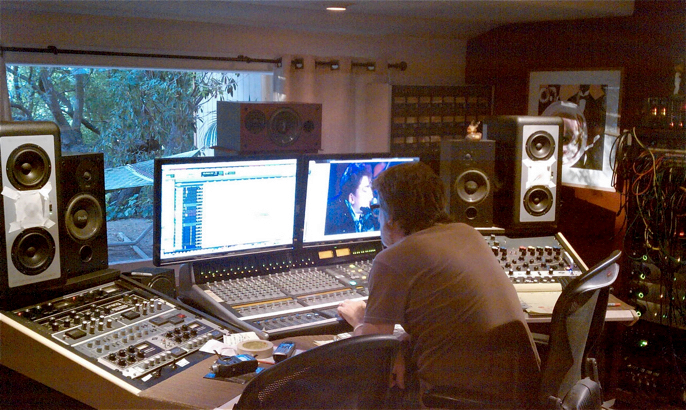 So what sort of settings would you use for lead vocal on a parametric EQ like the one on an E or G series channel strip?

Yeah well most of the time it’s just adding a bit of top end shelving the first thing I’ll just crank the top knob a couple of db at around 10k and sometimes I’ll go a little lower or a little higher frequency depending on what’s needed. Then usually what I’m spending some time on is finding that magic mid range frequency that’s gonna make it sit in the track where it has its own space. It can be anywhere from 1k to 5k, somewhere in there and sometimes with a pretty narrow bandwidth or in the middle. Then maybe filtering out more lows even though there’s the high pass filter also doing it. I do also like the SSL channel strip’s compressor on vocals so the one in the British and White Channels are great to use for that usually with a fast attack. That’s great when you want to add a good deal of grit. But sometimes I don’t want that so I won’t use it. But if it’s a rock thing where grit is good I’ll use that. But, sometimes taking out some of the low mids on the EQ section like around 300 to 400 will help bring out clarity without having to add too much.

Yeah or more with a wide bandwidth. Unless it’s like a problem area from the original recording that needs to be dealt with but usually just a general taking out of the low mids will clear things up nicely.

In cases where you want more grit on a vocal in a rock track would you ever use both the British Channel compressor in the channel strip and the Black 76 in the same chain?

Sure, sometimes I might do that yeah. I have no problem doing double compression and usually in that case where it’s something where I do want a little bit of grit it’s gonna be more of a compressed kind of vocal sound and the 1176 is a classic rock vocal sound too so yeah I probably would be using both. Sometimes I’ll use one or the other. It all depends on how it sounds in context of the music of course.  As I said before for vocals I like to use a fast attack. For the release if it’s starting to get a little pumpy I’ll make it slower to smooth that out.

Is there anything else you’d use in a processing chain for vocals?

Yeah that’s mostly it. Obviously there’s usually going to be some delay and reverb after that. I’ll usually have a slap kind of thing and then going into often a plate reverb sometimes short sometimes long or sometimes a room reverb if I’m going for a tighter thing. But that’s generally the vocal channel. Although sometimes I’ll use a Neve also though or an emulation like the EQ-73 in T-RackS if I want it to be a little smoother you know? 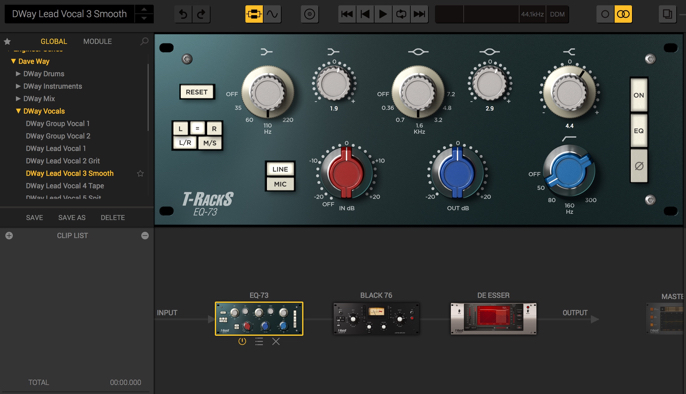 The SSL has more of a hard sound but if I’m trying to keep it software or warmer sounding I’ll use a 1073 type EQ. What else am I gonna use…  well a tape saturation plug-in like the Saturator X in T-RackS is good. I’ll use that on a vocal just for vibe or saturation and all kinds of different distortion things just blending in for extra harmonics. 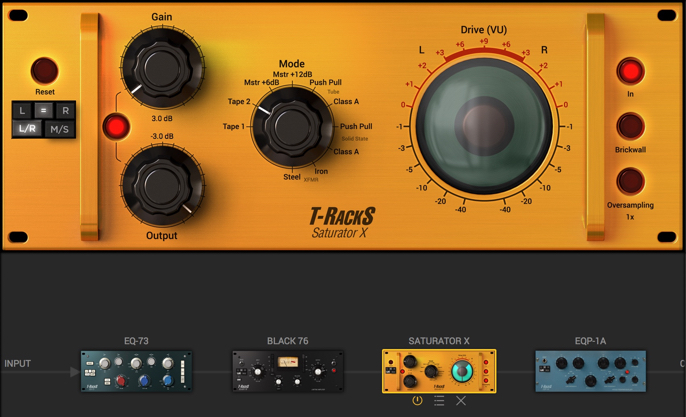 Stay tuned for more IK articles and interviews with other top engineers, producers and artists only at ikmultimedia.com!