IK Multimedia is proud to announce AmpliTube Brian May for Mac/PC, iPhone and iPad. Both feature precise models of the exact live and studio gear used by the legendary guitarist from the iconic band Queen – all recreated in collaboration with Brian May himself.

From Brian’s treble booster to his three-amp live setup and carefully curated effects selection, guitarists can enjoy new amp, cab and stompbox models in a convenient package, along with presets covering his celebrated discography. Each model was created with the supervision of Brian May and his long-time technical team, to carefully replicate his rig.

A key element of Brian’s distinct sound comes from his Red Special guitar that, famously, he hand built with his father in the 1960s from spare parts and household materials. Because the guitar is such an integral part of his rig, IK’s engineers went the extra mile to even create a new stompbox effect that helps simulate the Red Special’s tone and controls. This offers guitarists a more authentic musical experience that pays homage to this living legend.

Inside AmpliTube Brian May

Available in convenient desktop app and plug-in for any DAW, AmpliTube Brian May offers up to 11 new models including 2 amps, 3 cabinets, and up to 6 stompbox effects.Included are unique offerings such as a new pedal modeling Brian’s Red Special guitar and a model of the one-of-a-kind, home-built “Deacy” Amp (with user adjustable battery power!) originally created by Queen bassist John Deacon, after modifying an old radio. Other highlights incorporate his famous triple-amp live setup; tone-shaping effects; and even a harmonizer for nailing those Queen stacked leads in a single take. 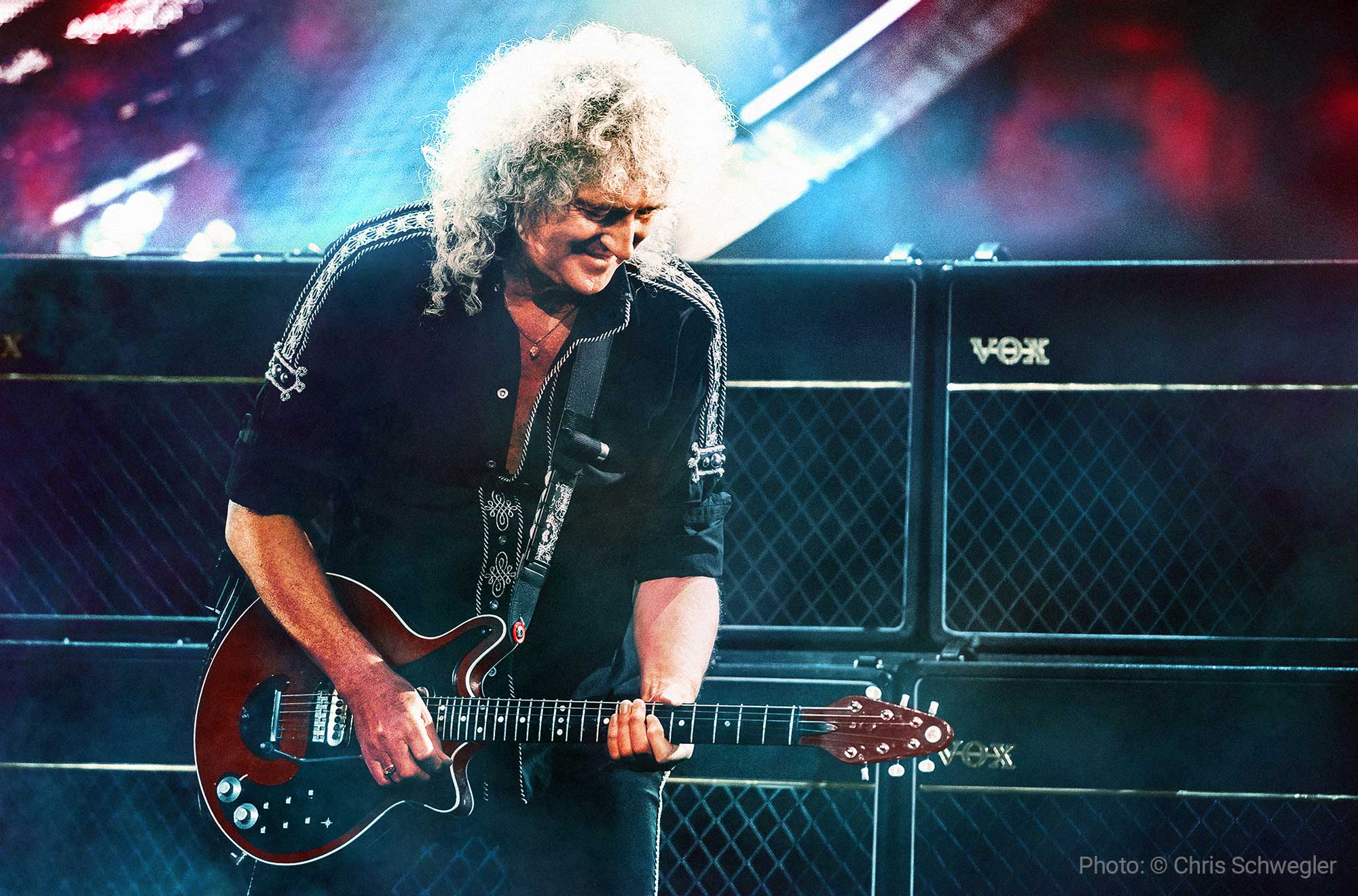 Based on the classic triple VOX® AC30™ setup, the BM 30 offers three amps with the effects chain in a Wet-Dry-Wet configuration to match Brian May’s iconic setup. The BM DK is a model of the small “Deacy” amp that became the trademark sound of many Queen songs.

May Wah was based on a rackmount Dunlop® Cry Baby® wah, modeled in the exact configurations Brian May uses to shape his tone, while the FOX Phaser was based on the unique and distinctive sound of the fOXX® Foot Phaser.

Star Gate is a noise gate that helps clean up the signal chain, minimizing the noise feeding Brian’s unique amp and pedal setup.

The iPhone and iPad version, the Brian May Collection (which is inside the existing AmpliTube app) also adds the 30 – a 30-band Graphic EQ, with +/- 15 dB boost per band and a+/- 15dB Level control, to help craft a more exact match of Brian’s tones. This pedal is already included for free in AmpliTube Custom Shop for Mac/PC.

A full set of painstakingly created song-based discography presets were compiled by Jamie Humphries, guitarist for the official Queen stage production “We Will Rock You”, who has also performed with Queen and Brian May. These presets allow users to dial up their favorite Brian May tones instantly and were constructed under Brian’s personal supervision

IK’s latest Dynamic Interaction Modeling™ was used to deliver the highest level of ultra-realistic sound when modeling Brian May's gear. The product of 20 years’ experience modeling analog gear, DIM™ models the behavior of every component in the circuit all the way down to its smallest nuance and character. Applied to May’s rig, it delivers the same sound and feel as his real gear.

AmpliTube is the world's most powerful guitar and bass tone studio for Mac/PC/iPhone/iPad. Available in both free and paid versions, it recreates the entire guitar/bass signal chain from instrument to recording device in a hyper-realistic and intuitive way. Users can also browse and purchase collections of gear models from the world's top gear manufacturers plus signature artist gear. AmpliTube is available for both Mac/PC, as a stand-alone and plug-in for most popular recording software, and app for iPhone and iPad.

AmpliTube Brian May (for Mac/PC) runs inside AmpliTube Custom Shop, a free download available to all. The new models are available now for purchase as a bundle from the Custom Shop, the IK Multimedia online store and from IK authorized dealers worldwide for $/€99.99 (excl. taxes)

No previous purchase of AmpliTube is required. The new models will show up as an optional purchase for existing users of AmpliTube 4 upon updating to the latest version.

The Brian May Collection (iPhone and iPad) is available via in-app purchase from within AmpliTube CS for iPhone or iPad, for $/€19.99. Individual models may also be purchased a la carte (Stomp FX - $/€3.99 each; amps - $/€6.99 each). All models are also part of IK’s All-In Bundle 2019 collection, which is available for in-app purchase.